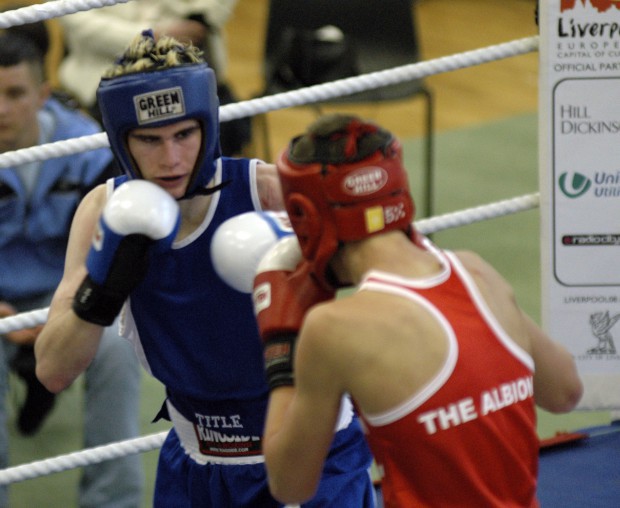 November 2004. The National Association Of Clubs for Young People along with the Amateur Boxing Association held their prestigious National Semi-Finals: – North & Scotland versus Midlands & Northern Ireland at Wallsend Boys’ Club The event consisted of twenty-three bouts divided into three age groups. Class A: 15 years of age; Class B: 16 years of age; and Class C: 17-19 years of age. Michael McGill, one of the band of helpers on the day, described it all later. “The day started early, 8am for some of the volunteers.

The marquee company came and the enthusiastic volunteers started to lay the special carpet down over the five-a-side pitch, so that when the boxing ring was erected it wouldn’t damage the playing area. They then headed up to the café and started to make up 150 packed lunches for the contestants and their seconds. With a mini production line of six people buttering bread, making fillings, making and wrapping the sandwiches etc. Then to their dismay the contestants and their followers started arriving early, at 9.30am. But the weighing in time wasn’t until 1pm and the tournament wasn’t due to start until 2.30pm.

Breakfasts, hot sandwiches and hot drinks for the guests were now suddenly a priority, with some of the volunteers also diverted to the “Boxing Arena” where a couple of hundred seats had to be laid out around the boxing ring which was being constructed in the middle of the hall. The café helpers were now running at one hundred and fifty per cent and had to send out for more supplies, with the bar, now also doing very good business. In the judo room the boxers were now weighing in and warming up, when a mini crisis occurred, as the running water suddenly stopped, and water had to be brought into the club in containers from a nearby house.

The twenty-three bouts ran off well although in one fight both contestants were disqualified, and a few bloody noses were all that some boxers received for their efforts. At 7.30pm the tournament was over, but for the wrecked volunteers the enormous job of cleaning up the mess, removing the seats, dismantling the ring etc was just starting. By 9.pm they were able to retire to the bar for a quick drink before going home for a well-earned nights sleep. The boxing tournament was a huge success with the winners going on to compete at St. Paul’s Amateur Boxing Club in Hull.”