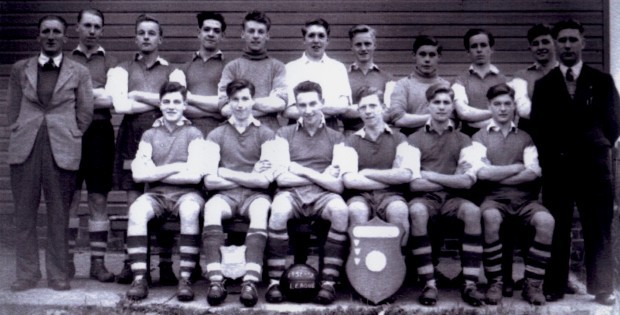 Football was of course becoming even more popular in the North East by the 1950s. Wallsend Boys’ Club had junior teams organised at that time into two age groups, 14-16 and 16-18. Norman Livingstone has clear memories of his time in the older squad in the 1951-1952 season. He recalls that in 1950 Dave Henderson (Right Half), Robert Rowe (Goalkeeper) and he (Left Back) were apprentices at the North Eastern Marine and playing for Wallsend St. Peters 14 to 16 age group.

Being a church club they brought in a rule that you had to go to church on a Sunday in order to play for the team the following Saturday. Also working at the N.E.M. was Fred Mason who was a toolmaker. He was also the manager of the under 18 team at Wallsend Boys Club. He wanted to improve his squad so he asked if they wanted to join the Boys Club. Hence the team for the 1951/52 season.

Normansays they were never very active members as they were mainly there for the football but he did manage to make a bookcase in John Haldon’s woodwork class.

Wallsend Boys Club played their home games on the Western School field. They would change in the Boys Club onStation Roadand walk round to the pitch through the allotments, carrying the corner flags etc. Their strip colours were red tops with white sleeves and a white collar, which was provided by the Club, but they had to buy their own blue shorts (ex-Army) and red and white hooped socks, as well as having to find their own way to the away matches.

Norman says he always had admiration for the goalkeeper as the goalmouths never had any grass on them and it was either a mud bath or rock hard to dive about on.

Towards the end of the season the games were building up so they played one team away on Easter Saturday beating them 11-0 and arranged for the reverse home fixture against the same team on the Easter Monday. When they turned up for the Easter Monday game the names on the team sheet were the same as the Saturday but the players were entirely different, being a lot bigger and older.

On talking to a couple of their playersNormansays they found out that the team they had sent was their Sunday morning league team. The score was 2-2 at half time but WBC scored 6 in the second half to beat them 8-2. The WBC team went on to win the 1951/52 league title.