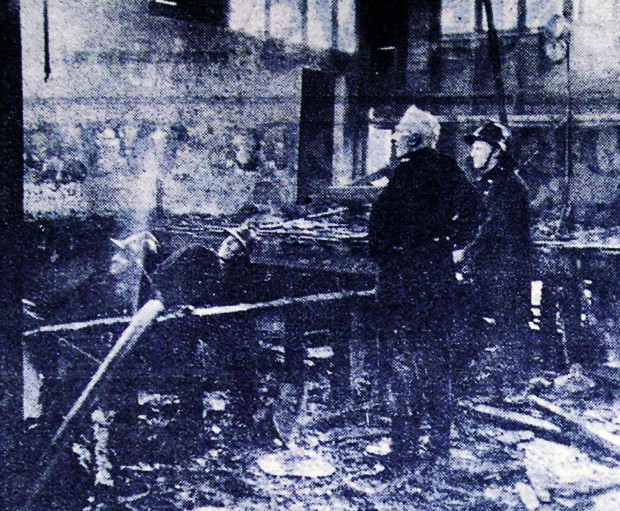 Sadly, all of this activity suffered a setback on June 9th1959 when the club building was gutted by a serious blaze. The hall and gym suffered extensive damage, and much sports equipment was lost. Ironically the club had just spent £600 on renovation and redecoration, the first since it’s opening in 1939.

Among the items saved however were all the trophies won over the years, and the framed certificate marking the honorary membership of the Duke of Gloucester. These had been stored in a fire-proof safe.

The mood of the club seems to have been determined as well as dismayed. After seeing flames almost completely gut the club Frank Herdman was quoted in the local press as surveying the charred ruins and saying, “We will just have to start all over again. The Club will go on.”

The press account continued; “Beginning at 5pm the fire swept through the hall of the timber building in Station Road, and then spread slowly into the main building.

Although Wallsend Fire Brigade had the blaze under control within half an hour, extensive damage was done to the hall and gym and to sports equipment stored there.”

A social evening for 100 members and friends of the Club, planned for that night, had to be cancelled. Many turned up and saw firemen in the ruined building. Later they helped to clear away the mess.

A meeting of the management committee was scheduled for the Monday evening when Mr Herdman was to have reported upon successful completion of the renovation and decorating work at the Club.

Mr Frank Davidson, licensee of the nearby Dorset Arms, who saw smoke rising from the back of the building where the boiler house was situated, raised the alarm. Two tons of coke was stored there but the boiler had not been used for months. At the height of the fire smoke was being blown on to Station Road, which held up the traffic. No one was in the Club at the time, and there were no casualties.