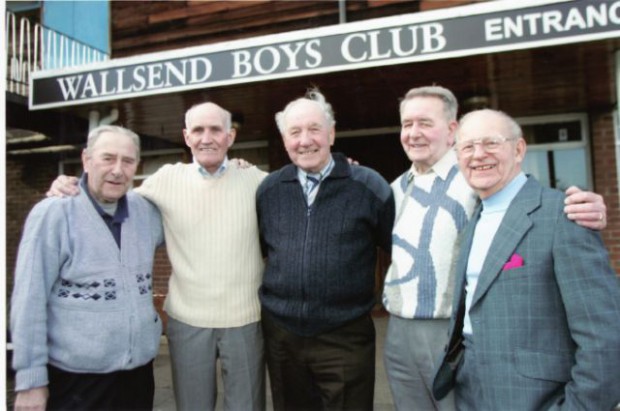 It was decided that it would be great to document as much of the club’s history as possible. In order to help with that research Michael McGill and Vince Carrick, who were at the heart of the ‘Heritage Project, made a plea in the local press for information from any former members of the original club to help in their research. The plea was successful and interviews with former members started to take place. It was soon realised in interviews with five of the veteran former members, Jack Scott, James McBlain, Fred Tate, Ray Oliver and Jimmy Swan, that over FIFTY YEARS earlier these gentlemen had been good friends with each other.

Through the passing of time, changing jobs etc, they had not been in contact with each other for many years. On 6th March 2005 Michael and Vince re-united the five gentlemen at Wallsend Boys’ Club. Jack Scott, 78, a retired British Gas engineer born in Wallsend and now living in Forest Hall, joined the Boys’ Club as a 15 year old and had not been back since the 1950’s. “I’ve got some great memories of this place. It was a good group of lads”, he said. “It was like a second home to me, but as we all got into our early 20’s we drifted apart”. James McBlain, 78, of Hadrian Park, Wallsend, joined as a 12 year old in 1938 and went on to become President of the club in 1969. Mr McBlain, a retired instrument curator at the Dental Hospital at Newcastle’s RVI, said “We were young and just looking for somewhere to play football and do other sports or hobbies to keep ourselves out of trouble”.

Fred Tate, 78, of Holy Cross, Wallsend, who was an engineer at Swan Hunter and Parsons, spent a lot of his time working on pantomimes and plays at the club. “We would put plays on and compete against other clubs”, he said. “I’ve got a lot of great memories and it’s really good to see all these people again. It’s the first time I’ve been here since the 40’s”. Ray Oliver, 78. of Wallsend, was there from 1938 to 1952 and was a top gymnast and a PT instructor. “It’s really good to come back”, he said. “There are a lot of good memories of this place”. Jimmy Swan, 69, formerly of Wallsend but now living in North Shields began attending the boys’ club in 1949 as a 12 year-old. He said, “I played football here and was a centre forward. I used to come to the boys club a few years ago with my grandson as well, and he loved it”.

Bringing together these grand gentlemen after fifty years apart, and to then to re-kindle their friendships was seen as a massive bonus to the authors in the research for this book.