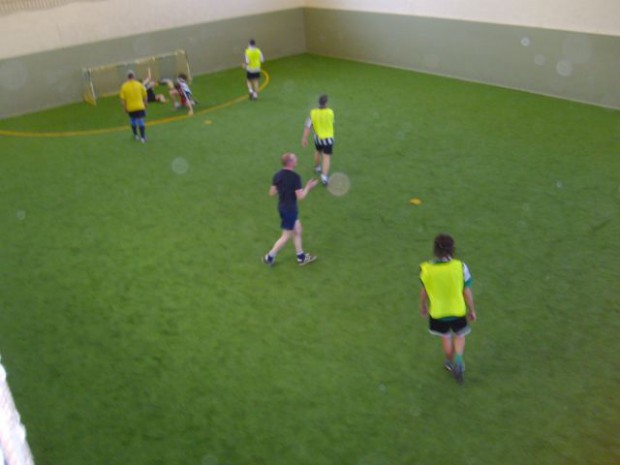 In 2005 a crucial decision had to be made about the maple flooring which had been the pride of Wallsend Boys’ Club.
At the opening of the “new” Wallsend Boys’ Club building in 1965 the committee had wisely invested in a five a side court, with the pitch having a very expensive sprung maple floor installed. This, over a forty-one year period, proved to be a very wise investment indeed.

After a slow start five-a-side football leagues were formed from under 7’s to under 16’s. The leagues soon had as many as sixteen teams per league, running on six nights a week, and were quickly to become the clubs main revenue earner. In October 2001 the sports hall floor was badly damaged due to water entering the building and seeping under the floor. The pitch developed a bevel some fifteen metres long by two metres wide, and temporary repairs were made, with leagues having to be cancelled for a week.

In June 2002 the floor was deteriorating so badly, that a professional flooring company was hired to repair and re-surface the floor at considerable expense. Unfortunately in June 2005 torrential rain hit the area with thousands of gallons of water flooding into the Boys’ Club, again badly damaging the maple floor. Emergency repair work was carried out, but the committee had to come to terms with the fact that the floor had come to the end of its useful life and a replacement pitch would have to be installed. As in 1965 a major decision on the sports hall had to be made. Should they replace it with another timber floor or should a new third generation Astroturf pitch be installed. At great expense the decision was made to install the Astroturf pitch, which has met the approval of members plus soccer legend Peter Beardsley who performed the official opening ceremony in March 2006.

Club leader Garry Marshall said Peter Beardsley loves the new pitch; he comes down every Friday and supports the club. He loved the old maple floor and it had a lot of tradition for him, but he couldn’t believe the transformation with the new pitch.
If the removal of the old maple floor was a jump into the future, the idea of leaving the, now not-so-new, premises on Station Road is an even greater one.