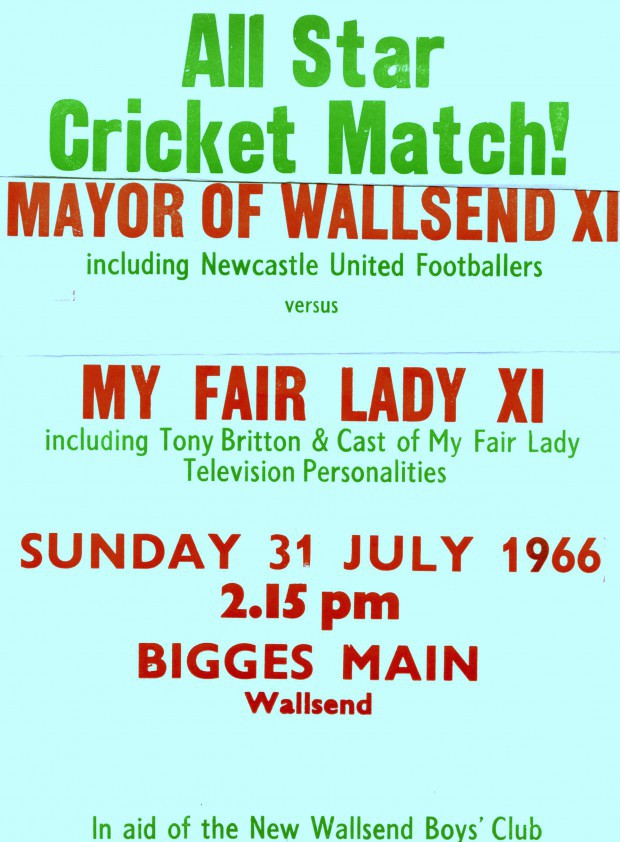 The “new” Wallsend Boys’ Club’s first planned venture was a charity cricket match between the cast of ‘My Fair Lady’, which was being staged at the Theatre Royal in Newcastle, and a Mayor of Wallsend’s eleven.Which included members of the Newcastle United football team.

The game was to be staged on July 31st1966 at Bigges Main, but plans to charge 1/- admittance fee had to be scrapped because of the Lord’s Day Observance Act since July 31stwas a Sunday. As a result a collection was taken at the match instead, resulting in rather less revenue than had been hoped for.

The theme of fund raising was one which was to appear repeatedly in the decades ahead, and indeed has always proved to be a huge problem. Grants were, and are, variable and unreliable sources of funding, so fund raising events were always needed. This applied to all Boys’ Clubs of course, so one week a year was designated ‘Boys’ Club week’ and permission was given for house-to-house collections etc.

David Beardall, was delighted with the response of the people of Wallsend in the house-to-house collection made in Boys’ Club Week in that first November of the new club. He was quoted in the Wallsend News as saying: “Club members collected £184.10s which was particularly praiseworthy in the view of the fact that the club has been in operation only a short time”.

Dave also expressed appreciation of the £20 raised by Mr Norman Wright, manager of the Boro Bingo, on the corner of Park Road and the High Street, after he had a collection amongst his club members for the Boys’ Club. By this stage, preparations were well underway for the official opening of Wallsend Boys’ Club in its’ new building. Dave Beardall was keen to extend an invitation to all former members of the club but was hampered by the loss of all club records in the fires. He used the local press therefore to advertise the opening on December 16th.