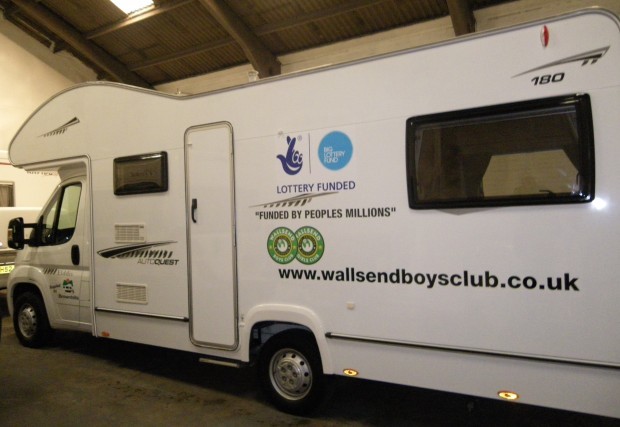 Wallsend Boys’ Club had applied in the Summer of 2010 to the Peoples Millions for their project the “Boyza Bus” to be considered for entry into the November Peoples Millions TV contest. Each day for a week every ITV region runs its own Peoples Millions contest, putting two approved bids head to head against each other, pitching for their share of a quarter of a million pounds. The public are able to vote by telephone from 9.00 am until midnight. Although each project can be publicised before the day of the vote, the telephone numbers are not announced until the day of each vote in the Daily Mirror, on the ITV news programme and on the Peoples Millions web site.

Thanks to Potts Printers the Boys’ Club had 5,000 leaflets printed in the early hours of the voting day (Monday 22nd November) ready for distribution by an enthusiastic band of volunteers. The Evening Chronicle published an article on the Monday, Radio Newcastle publicised the project and the Tyne Tunnel displayed the phone number on their illuminated sign over the approach road to the Tyne Tunnel. Wallsend Boys’ Club’s “THE BOYZA BUS” project was in a head to head vote against Owton Rossmere Resource Centre, Hartlepool’s “SAIL OFF TO A BRIGHT FUTURE” project.

The result was revealed on Tuesday 23rd November, with Wallsend winning the vote and being awarded the £50,000.00. James Turner, Big Lottery Fund head of region for the North East said “This is great news for the people of Wallsend. This just goes to show what groups can achieve when they have the support of their local community behind them”. Colin Shilton of Wallsend Boys’ Club said “It was obviously a big team effort from not just the club staff, but also from the volunteers who mobilised friends, families etc to help ensure we got the votes required”.

The “BOYZA BUS” is multi-functional and will offer the opportunity to engage in a broad range of activities in the local community, giving taster sessions such as street dance, healthy cookery, football and exercise. The club had been concentrating in the Howdon area and met regularly with local police to identify other hotspots where young people congregate, including the Rising Sun Country Park, King Edwards Bay, Tynemouth and Richardson Dees Park, Wallsend. The new bus will enable the club and its partners to reach further into the community. The bus will operate in partnership with the YMCA North Shields, Barnado’s, Connexions, local schools and colleges. This will help to maximise the benefit to young people across all of North Tyneside.

As well as purchasing and outfitting the bus, the money also went towards funding a youth worker for a year. Alan Strachan of Wallsend schools and services said “The work we have been able to do with Wallsend Boys’ Club over the last two years has made a significant difference to the lives and chances of over 400 young people in the Wallsend area. We look forward to further developing our partnership so that these and hopefully many more young people, can continue to enjoy these benefits”. Inspector David Guthrie, of Wallsend Neighbourhood policing team said, “Neighbourhood officers have worked closely with Wallsend Boys’ Club over a number of years and fully supports the work they do with young people.

Police officers often come across groups of young people hanging around on street corners because they say there’s nothing else for them to do. Some simply drift into underage drinking, crime and disorder. This club offers activities for young people which not only gives them something worthwhile to do with other young people, but also helps prevent them becoming involved in anti-social behaviour. We have listened to residents who are concerned about youth disorder in their community and we want to help stop it occurring by working with partner agencies such as Wallsend Boys’ Club”.