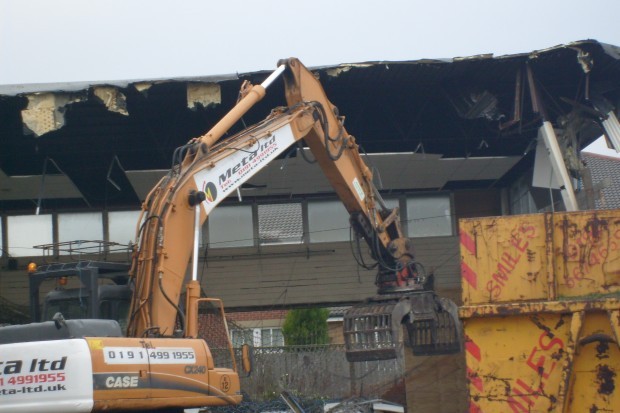 In the high winds of January 5th 2012 yet another dramatic twist came in the tale of Wallsend Boys’ Club.74 years after the opening of that first L- shaped wooden club house and 47 years since the opening of the then state of the art 1960’s building, the end wall of the building was blown inwards onto the Astro Turf five-a-side pitch. Luckily, this happened during the night and not when the Boys’ Club would have been used by the community during the day.

At first, it was envisaged that the wall would be re-built within three weeks. Unfortunately, the building surveyor’s structural report condemned the building as being unsafe for future use. Unthinkable therefore, on Wednesday 22nd February 2012 demolition of the iconic building began. Chairman Steve Dale was at the site on the Wednesday along with club president Peter Kirkley. Steve said “This is a very sad day in the history of the Boys’ Club. It’s 47 years as our home in this building and before that from 1938 in the original wooden huts.”“Lots of generations of young people have developed at the Boys’ Club and they have wonderful memories of the place, and so have we. It’s a major crossroads for us today.” Peter Kirkley said “Although my main interest is in the football section, the club has always very much been in my heart, and hearing the youngsters standing here today saying that they do not know what they are going to do now the club has gone.”“It’s very depressing. The end of an era for Wallsend. It also means the end of careers for most of the staff”. “The damage to the site coincides with funding coming to an end from external organisations”.

Ashleigh Harrison aged 16 was a former regular attendee at the club and was there to see the demolition start. She said “I would come here every night, you could just chill out and there were always different activities you could take part in. Everyone has so many happy memories and you made so many friends. There is nothing to do now the club has gone.” Five days before the demolition of the club took place, Teenagers gathered outside the club to launch a campaign to keep the club going. Chairman Steve Dale said “It was a very pleasant surprise to learn that a group of our young people had contacted the Mayor Linda Arkley, off their own back to explain in their own words why they valued the youth work at the club. For the staff and trustees it is obviously reassuring to know that the young people of the area, not only appreciated the work the Boys’ Club has done, but actively want to help to make sure that it does not come to an end.

We hope that enough people have the same determination that our young people have shown to get the youth provision up and running again.” Mrs Arkley said “Wallsend Boys’ Club makes an important contribution to the borough, as recognised through the financial support we have given them over the years, and I appreciate how highly valued it is by those who used the club, in particular children and young people.”“That’s why officers from the council have been in regular close contact within the management team at the club. Since they encountered problems with their premises in Station Road, to explore what help we can give them.”

Former Wallsend Boys’ Club member ex Newcastle United, Sunderland, Fulham player and former Huddersfield manager and now Birmingham City manager Lee Clark said “It’s quite emotional, because this was my childhood from the age of six to fifteen.” “Most of my mid week nights were spent here, if it was not training or playing with the team, it was five a side football leagues. And I grew up with and am still friends with Alan Thompson, Robbie Elliott and Steve Watson. It’s a shock to all of them to see it because it’s part of the area, part of history. It’s amazing, because I’m looking at the rubble, but I can place everything. I know where the five- a- side court was, I can see the little gym we used upstairs, the cafeteria where we had a can of pop and a bag of crisps after training, the pool tables and the vending machines. We used to have our Boys’ Club membership cards, with our unique numbers and photo’s on them, if you forgot it you never got in the club. It was a very special time. It has played a huge part in my life and what I’ve done. It’s just strange, because whenever I’ve come back to see family or friends, I’ve driven past here and seen the Boys’ Club. Now it’s a hole in the ground, dust, rubble.

When you talk about Wallsend, the Boys’ Club and the shipyards are things that spring to mind.”
The Trustees of the Boys’ Club decided that it would be more beneficial to re-locate any possible new boy’s club premises on the same site as the football pitches at Rhyedt Avenue. This would mean that all the activities would take place on one site. The Trustees and Members Consultative Committee are working on a recovery plan to secure a new building for the boys club and funding for youth provision. Hopefully in the near future the world famous Wallsend Boys’ Club will rise again with the help of grants and donations from the public and local businesses.